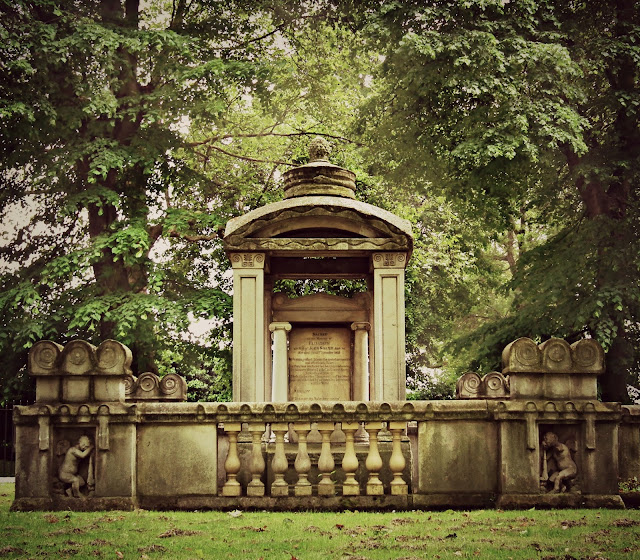 Sir John Soane never had much luck; his reputation has survived better than his buildings. Born in 1753 he was most active at the end of the Georgian period when his neo classical clean lines, careful proportions and decisive detailing were just going out of fashion. The next generation of gothic revivalists demolished many of his buildings and others were finished off by accident or the Luftwaffe. His most famous work was the Bank of England but most of this was peremptorily demolished by Sir Herbert Baker when he rebuilt the bank between the wars, a move described by Nikolaus Pevsner as "the greatest architectural crime, in the City of London, of the twentieth century." Soane’s new infirmary at the Royal Hospital in Chelsea, was destroyed in the blitz in 1940 and his work on the Palace of Westminster was destroyed by fire in 1834. His work on Freemasons Hall in 1821 was demolished to make way for the current building, and his National Debt Redemption Office and Insolvent Debtors Court of 1823 were demolished in 1900 and 1861 respectively.  His design for the new Law Courts at Westminster Hall was completed in 1822 but was so ferociously attacked by author and politician Henry Bankes that Soane was forced to demolish the façade of the building, set the building lines back several feet and redesign it  in a gothic style instead of the original classical. Even this did not save it though – it was demolished in 1883. Enough of Sir John’s work survived to guarantee his reputation though he is still most famous of course for his house at Lincoln’s Inn Fields which became the Sir John Soane museum.

Sir John's mausoleum in Old St Panras Churchyard was designed and built for his wife Eliza who died in 1815. Elizabeth Smith was the niece and ward of George Wyatt the builder whom Soane knew the from working with him on the rebuilding of Newgate prison. On the 10th January 1784 Soane took her to the theatre and a few weeks later, on the 7th February she took tea with Soane and a group of friends. Soane began to accompany her regularly to plays and concerts and on the 21st August 1784, less than 8 months after that first visit to the theatre, they were married at Christ Church in Southwark.

They had four children, John born in 1786, George in 1787 (but who died six months later), another George in 1789 and Henry who was born in 1790 but died the following year. Soane was disappointed that neither of his surviving sons showed any interest in becoming architects. John was lazy and suffered from ill health. He was sent to Margate in 1811 to improve his health where he met a woman called Maria Preston. John badgered his father into agreeing to a marriage which Soane eventually did on the stipulation that Maria’s father provided a dowry of £2000. The marriage went ahead on the 6th June but the dowry failed to materialise. Not to be outdone the 20 year old George wrote to his mother a few weeks later to break the news that he had married Agnes Boaden, the daughter of an older acquaintance, on the 4th July. He made no bones about the reason for the marriage telling his mother that he had done it “to spite you and father.”  Sir John tried to keep his wayward offspring in check by tightly controlling their finances. George retaliated by telling his father in 1814 that if he did not settle £350 per annum upon him and Agnes he would be forced to take to the stage for a living and become an actor. Later that year Agnes gave birth to twins, only one of which survived infancy. Two months later George was imprisoned for debt and fraud. Possibly behind her husbands back Eliza Soane settled the debt and repaid the embezzled money to get her son out of prison.

In September  1815 an article was published in the magazine Champion called The Present Low State of the Arts in England and more particularly of Architecture. Sir John Soane was the particular target of an acrimonious attack in the article which, although it had been published anonymously, it soon became clear had actually been written by George. His distraught mother wrote on the 13th October 'those are George's doing. He has given me my death blow. I shall never be able to hold up my head again'. She died on 22 November 1815.  and was buried 1 December. Soane wrote in his diary that he had endured 'the burial of all that is dear to me in this world, and all I wished to live for!'

Soane was never reconciled to George and their feud continued until his death. His son John died in 1823 and was buried with his mother in the family vault. Soane set up a trust fund of £10,000 to support his widow and children.  The following year he found out that George was living in a Ménage à trois with his wife and her sister by whom he had a child called George Manfred. George was scraping a living as an author and his always uncertain temper suffered even further under the stress of always being a step away from poverty. He drank and both the women in his life and his children suffered from domestic violence at his hands. Soane helped the women financially but refused to help his son. It is said that he refused a baronetcy because he did not want george to inherit the title on his death.  When he did die in 1837 he left a considerable bequest for the maintenance and upkeep of his house as museum but left his son a  small annuity of £52 a year explaining in his will that the bequest was so small because of 'his general misconduct and constant opposition to my wishes evinced in the general tenor of his life.' George challenged the will through the courts on the grounds that his father was insane. The challenge was rejected by the courts and George half heartedly attempted an appeal which he eventually let drop. George Sala in his memoirs said “I knew the disinherited George Soane well - a  gaunt, sad man, earning a precarious livelihood as a minor poet and playwright.” George died in 1860 in Portland Place, at the age of seventy. He was not buried in the family mausoleum.

Nicolas Pevner's verdict on the Mausoleum: "Outstandingly interesting monument by Sir John Soane to his wife, who died in 1815, extremely Soanesque, with all his originality and all his foibles. A delicate marble monument beneath a heavy Portland stone canopy. Four piers with incised Ionic capitals; a pendentive vault carries a shallow drum encircled by a tail-biting snake (symbol of eternity), with a pineapple-shaped finial. The tomb is surrounded by a low balustrade with distinctive acroteria, which also encloses the steps down to the burial vault. Sir John Summerson suggested that the tomb can be interpreted as civilization (the monument) within eternity (the surrounding canopy)." 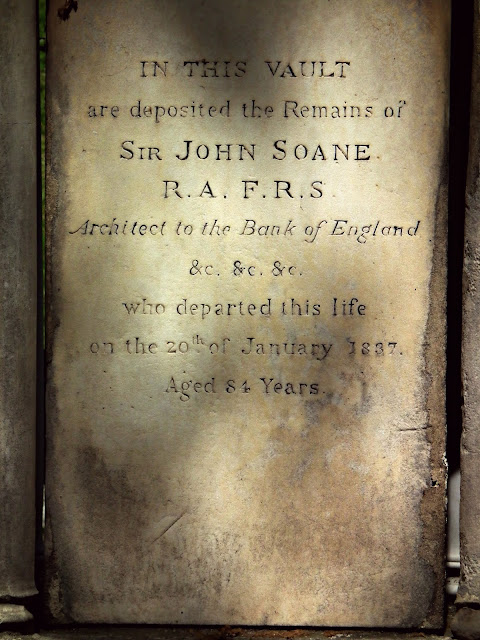