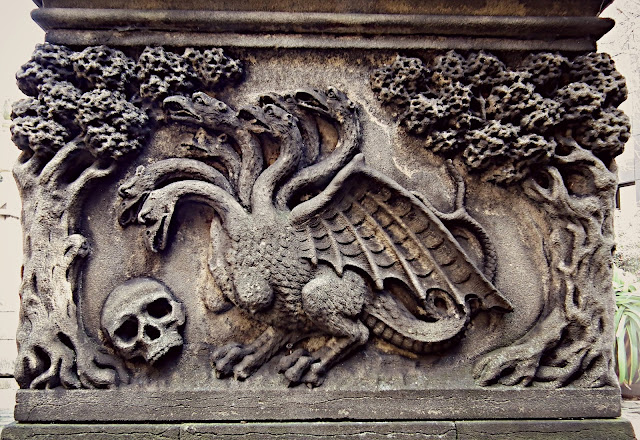 A short distance from St Mary’s at Lambeth the two John Tradescants, father and son, had an estate off the South Lambeth Road. They were gardeners, travellers, naturalists and, perhaps above all, great collectors of curiosities. As gardeners they both worked for Kings Charles I and introduced many new exotic species into British gardens. As travellers they visited Russia, the Levant and Algiers (Tradescant the elder) and the new colony of Virginia (Tradescant the younger). As collectors they founded the first museum ever open to the public in England, the Musaeum Tradescantianum housed in a building known as the Ark. The exhibits were divided into natural objects (naturalia) and manmade objects (artificialia) and included whale ribs, a mermaids hand, a mummy’s hand, part of a Barometz (a vegetable lamb), crocodile eggs, a lion’s head, a banana, various fossils and a sliver of wood from the true cross.

When John Tradescant the younger lost his only son to a childhood illness he was somehow persuaded to leave the collection to astrologer, alchemist and fellow collector Elias Ashmole. When Tradescant died Ashmole, who was by then living next door to John’s widow Hester, tried to claim the collection only to find Hester refusing to hand it over. An acrimonious squabble developed which led to accusations (Hester said Ashmole had knocked a hole in the wall dividing their properties so he could make himself at home on her estate) and counter accusations (Ashmole alleged Hester had deliberately placed a dung heap in a position which allowed thieves into his property and to make off with 32 of his hens and roosters) and eventually ended up in court where the Judges backed ﻿ Ashmole’s right to the collection. Shortly afterwards Hester was found face down in a shallow pond on her own property, dead, and Ashmole could finally take charge of the collection. Ashmole later persuaded Oxford University to house the contents of the Ark and so the Tradescant’s collection became the basis of the Ashmolean Museum. Ashmole is also buried in St Mary’s, inside the church beneath a memorial slab which is no longer on public view as it is in the offices of the Garden Museum.

In “ London’s Dead” author Ed Glinert claims that there is a tradition that Elias Ashmole offered himself up for execution in place of Charles I “ as those that ordered Charles’s execution were all Freemasons and no Masson could execute his Grand Master, Charles I, the two men swapped over and Ashmole allowed himself to be executed while Charles I lived out the rest of his days as Ashmole.”As I can’t find any trace of this rather ridiculous theory on the web I can’t help wondering if Glinert isn’t pulling our leg here.

The Tradescant’s magnificent tomb was commissioned by Hester Tradescant after her husband’s death in 1662. The tomb we see now is not the original however – after barely standing for  a hundred years in the churchyard it was badly weathered enough to merit being  recarved in 1773 when the lid was also replaced.  It was recarved again in 1853. The original lid is on display inside the Garden Museum where you can read still the original epitaph attributed to John Aubrey:

Know, stranger, ere thou pass, beneath this stone
Lie John Tradescant, grandsire, father, son
The last dy'd in his spring, the other two,
Liv'd till they had travelled Orb and Nature through,
As by their choice Collections may appear,
Of what is rare in land, in sea, in air,
Whilst they (as Homer's Iliad in a nut)
A world of wonders in one closet shut,
These famous antiquarians that had been
Both Gardeners to the Rose and Lily Queen,
Transplanted now themselves, sleep here & when
Angels shall with their trumpets waken men,
And fire shall purge the world, these three shall rise
And change this Garden then for Paradise. 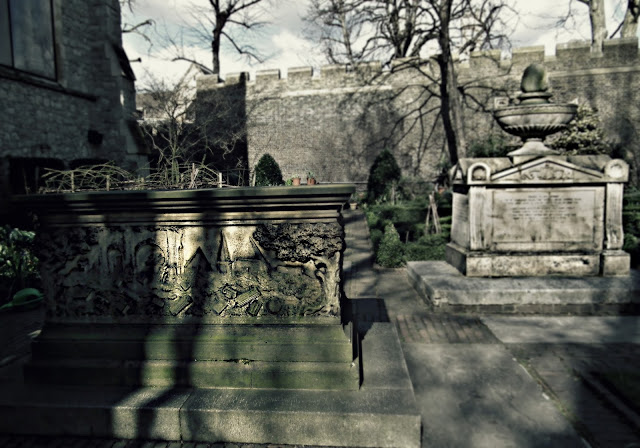