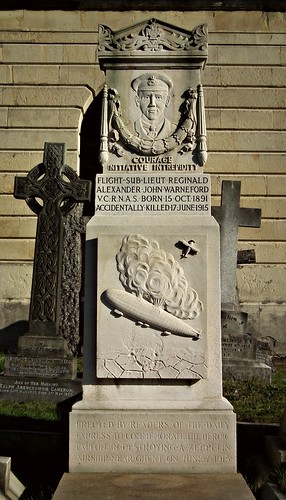 Daily Express readers chipped in to pay for the monument raised over the final resting place of 23 year old Victoria Cross winner Reginald Alexander John Warneford. It lauds his “courage, initiative, intrepidity,” – if he was a son of mine I’d probably be cursing him as ‘reckless, irresponsible, foolhardy’. Young Warneford was a merchant marine who joined the Navy on the outbreak of war and found himself being trained as an aeroplane pilot (there was no RAF as yet, so the navy were in charge of the air as well the sea). During training his commanding officer is supposed to have said “this youngster will either do big things or kill himself." He was stationed in Belgium when he won the Victoria Cross. On the 7th June he was flying when he spotted a German Zeppelin LZ37 near Ostend. He gave chase and despite heavy defensive machine gun fire from the airship he managed to drop his bombs on it. The Zeppelin exploded and crash landed but Warneford’s plane also suffered problems when the engine stopped and he was forced to land in a field behind enemy lines. In less than half an hour he managed to carry out some makeshift repair on the engine and escape before he could be picked up. The French were the first to honour him, General Joffre awarded him the Légion d'honneur at a special lunch on the 17th June. Intoxicated with glory and perhaps too much champagne Warneford took an American journalist out for a spin in his plane after the ceremony. Pushing his machine to the limit in a near vertical climb to 200 feet the wings collapsed and the pilot and passenger were both thrown to their deaths. 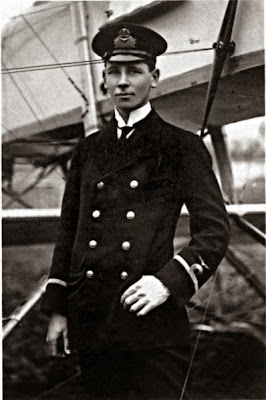