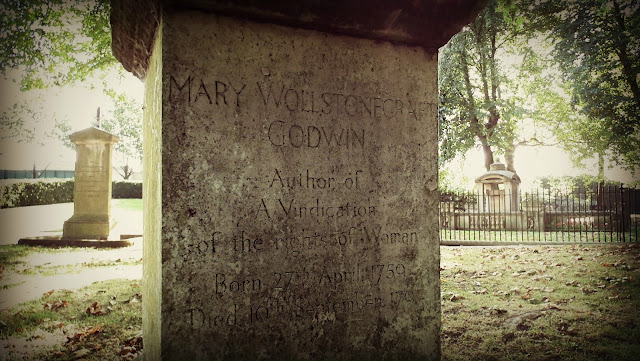 Radical William Godwin erected this memorial to his famous wife shortly after her death. It became a favourite place to meet for the poet Shelley and the feminists daughter Mary (who was, of course, later to write 'Frankenstein.'): "Shelley and the two girls enjoyed long afternoon walks around London in the radiant June weather and their favourite rendezvous was Mary Wollstonecroft's grave in Old St Pancras Church Yard. Mary, Jane and Shelley sat on the grave and talked for hours. We do not know what they talked of: could it have been other than the rights of women, free love, atheism, political and social tyranny, the community of radical spirits? How far Shelley, sensing the abnormally close relationship between Mary and her father, felt that he had discovered another paternal tyranny that required liberation, we cannot tell either, though it is is hinted at in one of his letters. He presented a copy of Queen Mab to her with a facetious joke on the fly leaf, but she wrote secretly in it: 'I am thine, exclusively thine. I have pledged myself to thee and sacred is the gift.'" (Richard Holmes 'Shelley - The Pursuit.")

William Godwin died almost forty years after his wife but was buried with her and has his entry carved on the opposite face of the memorial. A third face is dedicated to Godwin's second wife Mary Jane Clairmont. All very modern for the 18th century but Godwin's was a radical household. The post mortem menage a trois were later forcibly split up when William and Mary were disinterred and reburied on the south coast by their grandson Percy. He wanted to grant his mother's wish that she be buried with her parents but didn't want to bury her in grimy Kings Cross. Instead he removed William and Mary's remains (but leaving Mary Jane Clairmont where she was) to a new Shelley tomb at the church of St Peters in Bournemouth.

Sir John Soanes monument can be seen in the background.