When asked to think of burial places in the capital the like of Highgate and Kensal Green are the most likely to spring to mind, but in the interests of honesty it has to be conceded that most London cemeteries are relatively small, scenically dull and in terms of their monuments and memorials, unremarkable. The affluent, the important, the powerful, those with any degree of celebrity at all, are likely to be buried in one of the magnificent 7 or in a handful of later rivals but the vast majority of London’s population, the hoi polloi who pass their lives toiling in unnoticed anonymity, are more likely to be buried somewhere utterly undistinguished, like West Ham Cemetery.

Like many of its counterparts across London the West Ham Burial Board was set up following the passing of the first of the Metropolitan Burial Act’s in 1852. The cautious alderman of the borough took their time acquiring 12 acres of land from local philanthropist Samuel Gurney, advertising the tender in 12 newspapers and writing to 10 local land agents before settling on a flat and barren site in the far north of the borough. The West Ham Cemetery opened in 1857 and was later enlarged; its 20 acres now lie contained within a 10 foot high brick perimeter wall adjacent to the 10 and a half acres of the Jewish cemetery. The cemetery is now owned by the London Borough of Newham and is still a working burial ground. In London Cemeteries Hugh Meller notes that “it is apparent that little regard was paid to the landscaping potential [of the site], good drainage and cost being considered more important. Thus West Ham is remarkable more for its lack of distinctive features than anything else.”  It is true that to the casual observer the cemetery contains little of interest, no impressive monuments, no well known burials and only a few trees punctuating the rather bleak prospect. But some at least of the rather ordinary memorials do have interesting stories to tell. 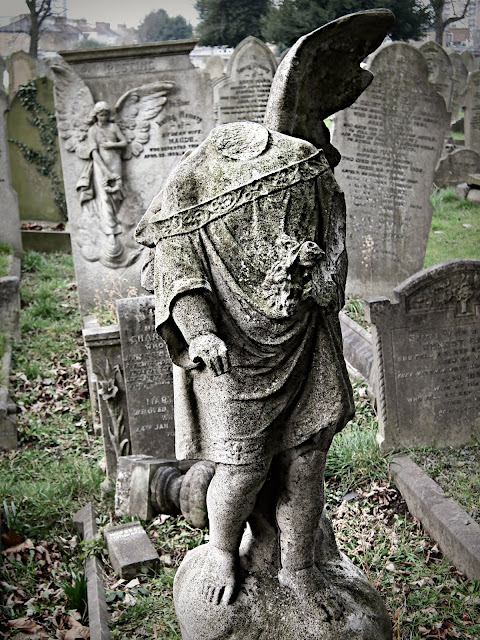 The most impressive memorial in the cemetery (there isn’t much competition it has to be said) belongs to Edith Ledingham. The monument was raised by public subscription, over 5000 people contributing to the £50 cost of the terracotta tablet set in Portland stone showing a small child seeking comfort from a diaphanously draped woman. Edith was the steward of the SS Iona, a passenger ship which caught fire while docked at Limehouse in September 1895. She died saving a child from the flames and was hailed as a heroine as a result. The Edinburgh Evening News of 21 September 1895 reported that the “funeral of the stewardess took place yesterday afternoon at West Ham Cemetery in the presence of a sympathetic assembly. It was at first intended to make a start from the Custom House, where the parents of the deceased reside, but with a view avoid any crush, the funeral met at the undertaker's premises, High Street, Poplar. The coffin, elm, bore the following inscription: Edith Mary Ledingham. Died 16th September, aged 21. The principal mourners were the mother and sister of the deceased.” Edith was initially buried in a public grave, presumably because her family could not afford a private one but 10 months after the funeral she was exhumed and moved to a private plot as memorials were not allowed on public graves. 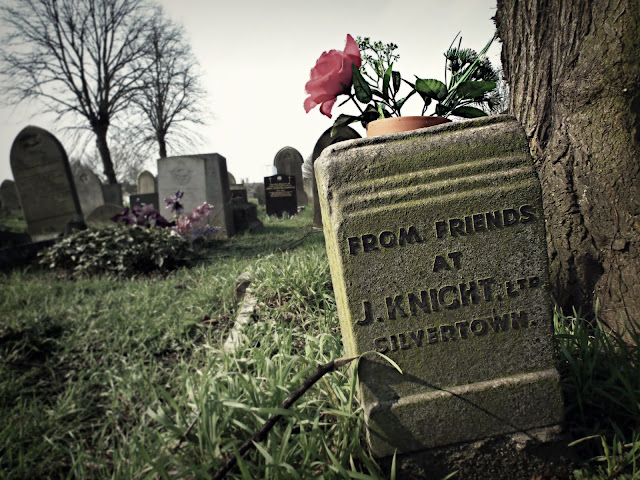 Researching the history of Margravine Cemetery in Hammersmith I had been astonished at the stories of dead babies found abandoned in the cemetery by the staff, something I hadn’t come across at other cemeteries. Trawling through newspaper archives for mentions of West Ham cemetery I came across a similar dead baby story in the Barking, East Ham & Ilford Advertiser and Upton Park and Dagenham Gazette for Saturday 11 August 1894:


BABY FOUND A HALF-DUG GRAVE, Mr. Coroner Lewis held an inquest at West Ham on Wednesday on the body of a newly-born male child. lt appeared from the evidence of the gravedigger, John Jarvis, that Friday night he left a grave in West Ham Cemetery only partly dug out. Next morning he was surprised find a deal box in the hole. The box was handed to the police, and was found to contain the body of the child. Dr. Grogono said the child had been born three days. The cause of death was exhaustion from lack of proper attention at the birth. A verdict in accordance with this evidence was returned. The Superintendent of the cemetery said, in reply to the Coroner, that the wall was too high for any woman to climb over. 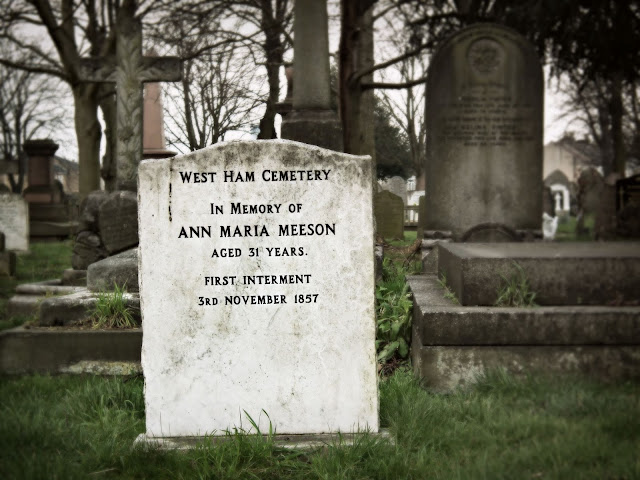 The first burial in the cemetery took place on 03 November 1837. The Essex Standard of 11 November reported on the event and on the new cemetery:
The remains of Mrs. Meeson, wife of John Meeson, Esq., of Stratford, were interred in West Ham Cemetery on Tuesday last, being the first interment in this newly consecrated burial ground. Since the closing of All Saints and the Brickfield's Chapel burial grounds a very large increase of interments has taken place at St. John's. Stratford, and St. Mary's, Plaistow. The incumbent of St. John's very considerately made a reduction in the burial fees so as to afford greater facilities to the poor for the interment of deceased relatives, and a similar arrangement was also made by the incumbent of St. Mary's, Plaistow. The remoteness of West Ham Cemetery from many parts of the parish would point out the necessity of the parochial authorities providing some economical conveyance for the mourners as well as for the corpse, as there are many who are ill able to meet the ordinary expenses of a funeral, upon whom this increased charge would fall a great hardship. This matter would appear deserving the notice of the burial society, especially as they have a local precedent to warrant them in so doing. For several years past the guardians of the West Ham Union provided a horse-hearse, with cloaks, &c.so that the funerals of paupers have been conducted with a decency and respectability that strongly contrasts with pauper funerals in many of the other metropolitan parishes.


Ann Maria Meeson must have died relatively young. Her husband, John Meeson Esquire of Statford only joined her in the cemetery 33 years later, in 1890. The Essex Newsman reported that the borough flag was flown at half mast and that the “large and representative congregation” in the parish church “was hundreds more in West Ham Cemetery, where the body of the deceased was laid in the grave which years ago received the remains of his wife. The funeral procession was of great length. An open carriage lined with lovely wreaths and crosses headed the procession. Next came an open car bearing the body, the coffin being hidden by wreaths. The mourners followed in eight carriages, and upwards of thirty other carriages were in the procession, many of them being those of gentlemen of the district.” 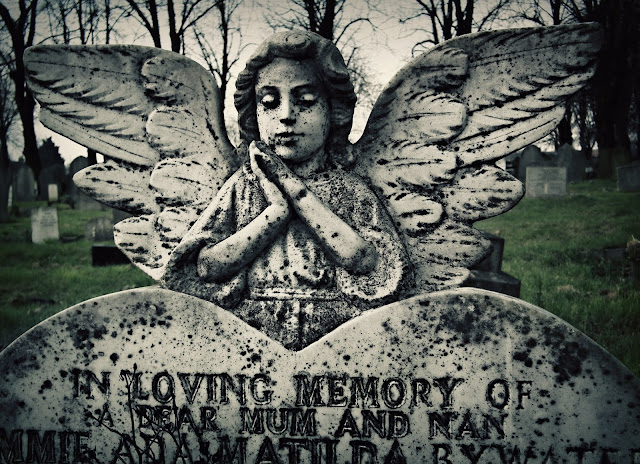 On a corner plot by the side of the main path stands a small red granite obelisk. The inscription on the base reads “In memory of the 26 boys who unhappily lost their lives by the disastrous fire which occurred at the school Forest Lane West Ham 1st January 1890 – erected as an expression of sympathy with the bereaved relatives by the managers and staff of the Forest Gate District School.” The story was reported widely in the papers all over the country; the Greenock Telegraph and Clyde Shipping Gazette of Tuesday 07 January 1890, just a week after the fatal fire, gives an account of the funeral of the victims the previous day;

THE DISASTER IN THE LONDON INDUSTRIAL SCHOOL – FUNERAL OF VICTIMS.


The funeral took place yesterday at West Ham Cemetery of the twenty-six little boys who perished New-Year’s morning at West Ham Industrial School. An immense concourse of people assembled along the route and at the cemetery. The relatives of the deceased were supplied by the school with tea and bread and butter before the funeral. Several officials attended to represent the Local Government Board, and Mr Theobald, M.P. for the Romford Division, was also present. The bodies were conveyed in seven hearses to St. James's Church, and among the followers were twenty boys and twenty girls from the schools, who acted as choristers. The Service at church, which was choral, was performed by the Rev. Dr Nicholson, and at the grave side the Rev. Canon Scott officiated. The little coffins, which merely bore the names and ages of the victims, were placed in five graves, and during the sad ceremony the children mourners sang the hymn, “There's a Home for Little Children.'’ 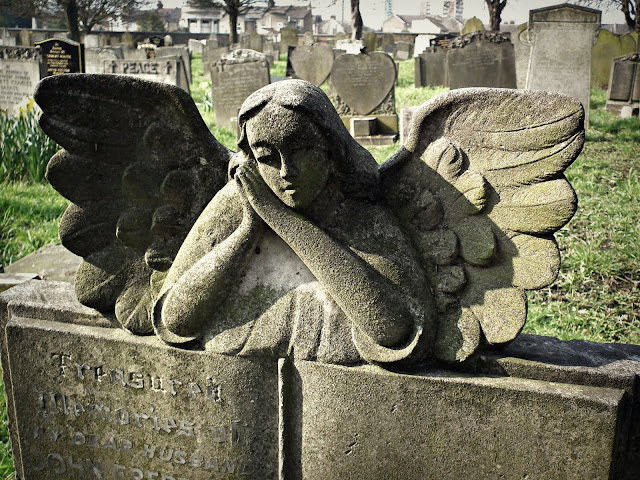 One can’t help wondering how anyone could think that a hymn with these words, sung by a choir of 40 children, would do anything but fill the hearts of the bereaved parents with wormwood and gall;

There's a home for little children
above the bright blue sky,
where Jesus reigns in glory,
a home of peace and joy
no home on earth is like it,
nor can with it compare;
for everyone is happy
nor could be happier there.


And tea and bread and butter before the funeral? Supplied by the institution that had let their children perish?  The industrial school was effectively a care home for children whose parents for whatever reason, were unable to take care of them (poverty probably being the commonest reason). The children came from as far away as Croydon but the majority were from the crowded slums of Poplar, Stepney and Bethnal Green. At the inquest the school superintendent Charles Duncan explained that the children had been put to bed at 7.45pm on New Years Eve, the same time as any other night, and that nothing unusual occurred until he was called from his quarters after midnight by the needle mistress Miss Terry who, in some consternation, told him that the needle room was on fire.  When he went to investigate he found not only the needle room but the corridor outside and the stairs leading to the dormitories full of smoke “so dense that be found it difficult to breathe.” He tied a handkerchief around his mouth and nose and on his hands and knees groped his way to the fire hydrant and extinguisher and tried, unsuccessfully, to put out the blaze. While he grappled with the fire other teachers evacuated the children. Unfortunately one of the dormitories was locked and the key in the possession of a teacher who had the evening off and had gone out to celebrate New Year. It took an hour to get into the two locked dormitories – every single child sleeping there had died of smoke inhalation and suffocation. The cause of the fire was a badly swept stove chimney which had set alight releasing clouds of toxic smoke.
Posted by David Bingham at 14:33