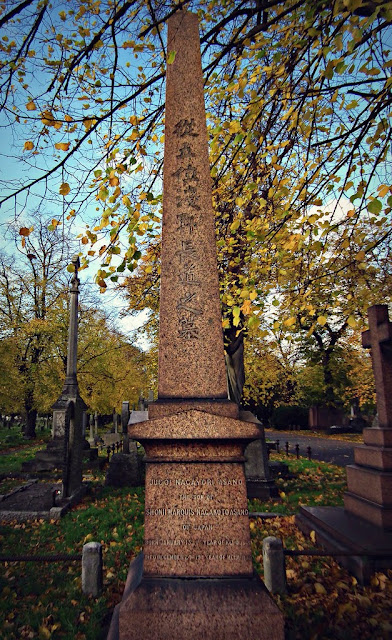 “Dr. Diplock, coroner for West Middlesex, held an inquiry on Friday afternoon, at the Crown Hotel, High-street, Kensington, respecting the death of Nagayori Asano, a native of Japan. Mr J. Z. Lawrence, solicitor, 165, Queen Victoria-street, identified the deceased, and stated that be was a Japanese, and had resided in London for the purpose of studying for the English bar. Deceased was twenty-one years of age. Witness heard he held high rank in Japan. Maria Smith, a cook, deposed that she resided at 21, Philbeach-gardens, South Kensington, where the deceased had lodged. On Friday morning witness entered his bedroom, and there saw him in the bed, with a wound in his head and a pistol lying by the side of his face. The deceased was unconscious, but lived for four hours. The Coroner: Did you know of any special trouble to cause him to shoot himself? Witness: No, nothing. The Coroner Did you hear a report? Witness No. Mr. Lawrence (recalled) said deceased had suffered from melancholia. He was not in debt to witness's knowledge. Mr J. A. Owles, surgeon, said that deceased died from a bullet wound, which, in witness's opinion, was self-inflicted. The jury returned a verdict of "Suicide whilst of unsound mind." The body, which has already been embalmed, is to be temporarily interred in a vault and afterwards conveyed to Japan. It was incidentally stated that the deceased held the rank of prince in his own country.”
Reynolds Weekly, January 2nd 1887


Nagayori’s father, Nagakoto Asano was an important political figure in Japan who supported the restoration of power from the Shoguns to the Emperor in the 1860’s. The Shoguns had been in effective control of Japan since 1192 and the Emperor reduced to a largely symbolic role. In the political upheaval caused when the Shoguns were unable to resist the United States' forcible opening of Japanese markets to foreign trade, the Emperor Kōmei asserted himself as the supreme political power in Japan. Nagakoto Asano was the Lord of the Hiroshima Shinden who helped negotiate the handover of power from the Shogunates to the Emperor. He became one of the most important political figures in Imperial Japan. Supporters of the Emperor were at once modernisers, who wanted to see Japan join the modern world and learn from Westerners and, at the same time, deeply traditional, wanting to preserve Japanese culture and convinced that their country was destined for supremacy on the world stage. Nagakoto lived a long life, dying at the age of 92 in 1937 just before the political path he had followed all his adult life reached its final destination in the Second World War. The urge to modernise was no doubt the reason Nagayori was sent half way around the world to train in a foreign system of law in a barbarian capital. The young man obviously felt lost and miserable in what must have been an utterly alien environment; why else would he have killed himself? His embalmed body never made it back to Japan, instead it was buried at Brompton Cemetery amongst the barbarians he probably despised and detested. Probate records reveal he left an estate worth £213, a very healthy amount for a law student, and that administration of the estate was granted to Nagayuki Asano of 37 Bleinheim Crescent Notting Hill, “the lawful attorney of Oka Asano Widow the relict now residing in Japan.” Was the attorney a relative? And it is a surprise to see that the 21 year old student was married.